Solander Gallery is proud to present an exhibition featuring six of our talented artists at this years Sydney Contemporary Art Fair at Carriageworks from 13 -16 September.  Our represented artists are Marci Tackett, Jacqueline Aust, Richard Adams, Aiko Robinson, John Pusateri and Belinda Griffiths.  We are excited to be taking a vibrant  and diverse selection of works on paper so come and visit us at Booth P09. 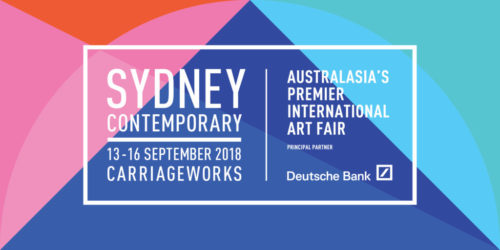 Congratulations to Solander Gallery artist Jacqui Colley on the announcement of her Premier Award in the 2018 Parkin Drawing Prize.

Jacqui’s entry “Long Echo” is a large etched aluminum panel that measures 2.4metres by 1.2metres. This ambitious, confident work loosely references aerial views of Canterbury, observing shapes and the geographic marks on the landscape from rivers which flow from the mountains to the sea, the great lakes and the few remaining wetlands. The surface of the work is etched with lines and textures in an intuitive interpretation of place.

“With intersecting grids, circles and lines I have mimicked the colonisation of the now mechanised land.”

Jacqui’s work and other finalists are on exhibition at the New Zealand of Fine Arts, Wellington from 17 July – 19 August

Further works by Jacqui are available to view here at Solander Gallery. 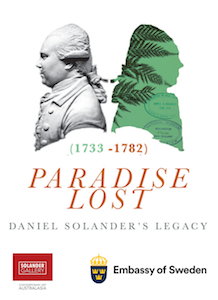 To coincide with the 250th Anniversary of Cook’s first voyage to the Pacific, Solander Gallery and project partner Embassy of Sweden in Canberra have initiated an exhibition to commemorate the contribution naturalist, Daniel Solander made to New Zealand’s history.

Scientist Joseph Banks employed Daniel Solander, a Swedish botanist and together they collected hundreds of plant species as the Endeavour circumnavigated New Zealand.

As paper was in short supply in 1760’s England, Banks and Solander bought printers proof of Milton’s book Paradise Lost and it was pages from this work that were used to press and dry the first European collections of New Zealand plants. 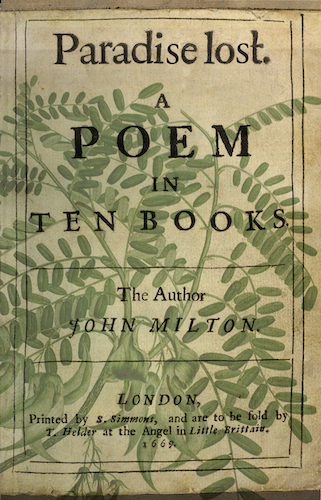 Ten contemporary New Zealand artists have been invited to respond to Daniel Solander for an exhibition that will open at Solander Gallery in 2019 and then tour nationally and internationally.

Expect further updates as we delve into the life of Daniel Solander, the botanist and nature’s argonaut.

Special thanks to the National Library of New Zealand and Museum of New Zealand Te Papa Tongarewa for the opportunity for artists to view the Banks and Solander collections.

Congratulations to three Solander artists for their selection as finalists in prestigious New Zealand art awards.

John Pusateri selected as a Finalist in the The New Zealand Painting and Printmaking Award 2018 (Waikato Society of Arts) with the work Buho y Calavera, Lithograph, 2017

Jacqueline Aust selected as a Finalist in the The New Zealand Painting and Printmaking Award 2018 (Waikato Society of Arts) with Atlas of Declensions, mono print, dry point, etching and photogravure, 2017

Alexis Neal selected as a Finalist in the 2018 Molly Morpeth Canaday Award 3D with Bed of Roses, woven printed paper, 2017

This year the invited award judge is the Australia painter/printmaker Dianne Fogwell who is also represented in New Zealand by Solander Gallery. Dianne has made a major contribution to the arts community in Australia through her own arts practice, teaching, curating and establishing press and print studios.

Jacqueline Aust, Locust Jones and Deborah Klein have all been selected for the Print Council of Australia Print Commission for 2017.  Each year the Print Council of Australia commissions 10 artists from an open call for submissions to create an edition of prints for the PCA Print Commission, which is then offerered to PCA members, collectors and institutional collections across Australia. 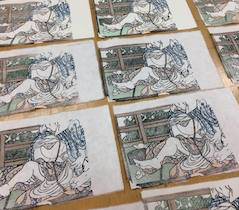 Aiko Robinson has recently commenced a two year scholarship at the Tokyo University of the Arts to study traditional Japanese Woodblock Printmaking (Mokuhunga). This prestigious scholarship is awarded by the Japanese Government to only 3 students each year across all disciplines. This is an exciting opportunity for Aiko to extend her interest in the contemporary application of this traditional and demanding artform. Works created during her residency will be on exhibiition at her upcoming exhibition at Solander later in the year.

John Pusateri has just returned from a residency at La Sierra University, California with a solo exhibition at the Brandstater Gallery scheduled this October. John will also be having an exhibition at Solander during 2017.  http://brandstatergallery.com/Upcoming-Exhibit 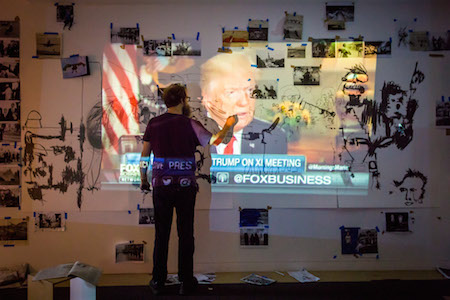 Locust Jones was invited to take part in the Museum of Contemporary Art Australia  MCA – Conversation Starters series. In this event Locust undertook a five metre drawing over a four hour period in response to a continual news feed of world affairs footage. This raw, physical act of drawing offers a powerful and live translation of the bombardment of news we hear everyday.(Image courtesy Museum of Contemporary Art Australia, photograph: Anna Kucera)

This year Solander has been invited to attend the Sydney Contemporary International Art Fair.  An exciting opportunity for the gallery to profile the gallery and promote our talented stable of artists.  The five artists we will be featuring are Alexis Neal, Aiko Robinson, Simon Kaan, John Pusateri and Locust Jones. If you’re in Sydney during September make sure you drop in to see us 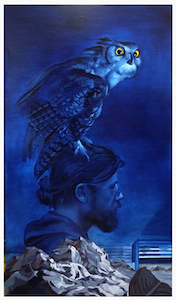 “Native flora and fauna have frequently featured in the hyper realistic paintings and prints of John Pusateri to investigate environmental preservation and restoration. In Pusateri’s newly developed exhibition, Head Trip the artist shifts his focus towards people, depicting the sitter’s personal and direct relationships with nature and with wildlife.”

For those interested in Art History there will be also be a special talk on New Zealand portraiture with guest lecturer Associate Professor Leonard Bell from the University of Auckland, on Saturday 27 August. 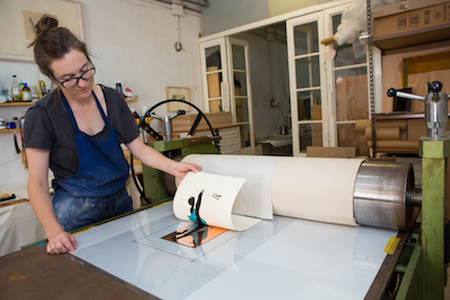 Click here to read an interesting APC interview with Solander artist Danielle Creenaune on her process and inspiration featured on the Australian Print Council blog. Drop in to the gallery to see her beautiful etching, mokulito and lithographic works.

During November the five artists selected for the 47° South artist residency journeyed to Stewart Island to begin their research. On arrival the artists were treated to a warm welcome by the Stewart Islanders at a potluck community dinner hosted by the Rakiura Heritage Centre Trust. What followed was a series of experiences provided for the artists by tour operators on Stewart Island that were both astonishing in their beauty and insightful in their presentation.

The challenge is now for the artists to work through their experiences in their studios to create a suite of artworks for exhibition in May 2016 that encapsulates their interpretation of Stewart Island – Stay Tuned.