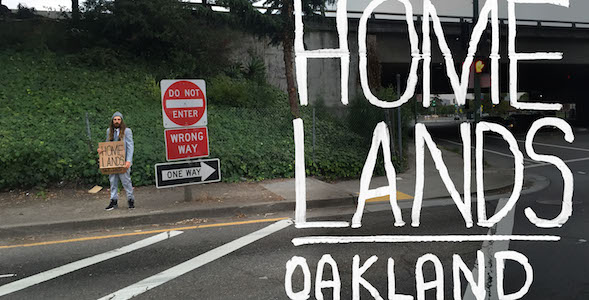 MIlarky has been based in Oakland, California. This collection, HOME LANDS | OAKLAND, has been sent back to New Zealand from his travels in the West Coast of America.

The Collection was grown out of time spent in the area’s not advised to go, through observation and interaction. While there Milarky based his life style out of a small garage where he kept his paint and parked his truck in which he slept in. After a month based in this studio/garage he left it and has been since and still is surviving out of his vehicle. This collection was researched and created while he was living in his truck. gathering the sign’s from location’s he learnt as strategically good for street askers all over Oakland.

This collection was inspired by the Homeless of Oakland, and the material’s are a collaboration between conversation’s and trading of what was trade able. MIlarky added his member’s, which are derived from the sign’s previous owner’s, while he was in a non disrespectful way, homeless himself.